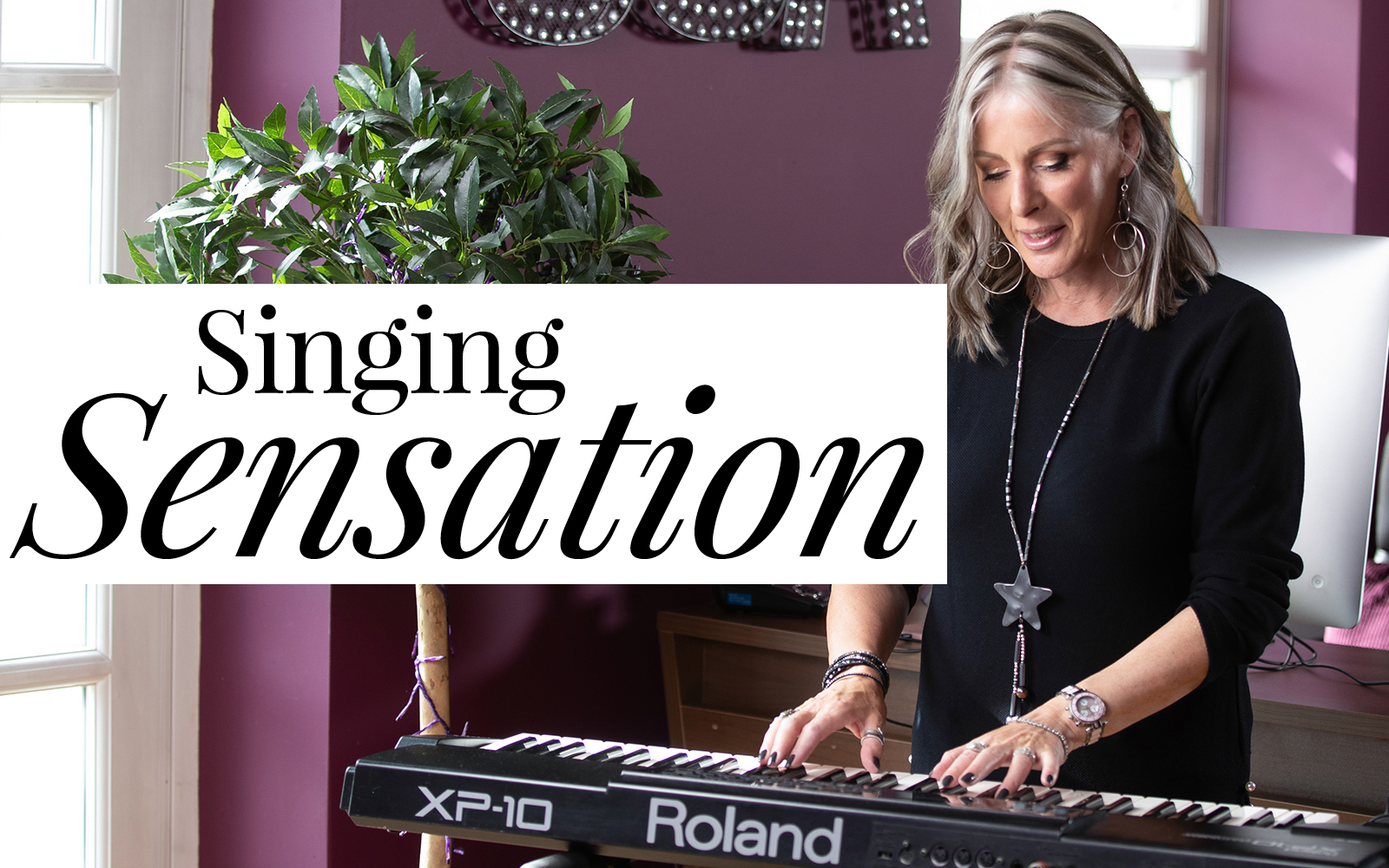 Professional vocal coach and founder of Northumberland based Vocal Ovation, Julie Miles has worked on The Voice, All Together Now and most recently, with Little Mix: The Search, and with more than four decades of experience in performing, she has plenty of knowledge to share.

For as long as Julie Miles can remember, she’s always been musical. She played the flute from the age of six, and made the decision towards the end of her O Levels to go to Newcastle College to do a Performing Arts course for two years. Then, she immediately found herself performing in a cabaret act with three girls and they started travelling up and down the country – and abroad, after which she began began singing solo and fronting bands. Whether it was pop, musical theatre, jazz or blues, Julie tried it all and sang professionally for more than 12 years. Today, she teaches a variety of singers just seven steps away from her home, in her studio in High Mickley, Stocksfield.

Despite her long and exciting career, Julie never thought that she would be a vocal coach. Vocal Ovation launched in August 2009, when Julie’s husband booked her a surprise singing lesson with pop singer and vocal coach David Grant.

‘I remember when I was still performing and I was watching the likes of Pop Idol and Fame Academy – I absolutely adored David and Carrie Grant and thought, I wish I had a vocal coach like that,’ Julie reminisces. ‘When my husband booked me a surprise singing lesson with David, I was only wondering the night before whether they were still doing lessons; it was a huge surprise. I had no idea what I was going to do next. I wanted to keep working with David and he mentioned becoming a vocal coach, so I started training with him and Carrie in London. I’ve been teaching now for just under 10 years. It was like everything aligned – like it was always meant to happen.’

Throughout her time in the music industry, Julie has met and trained a range of inspirational talents. She’s worked with successful contestants on top TV talent shows including The X Factor, America’s Got Talent and The Voice, and appeared as one of The 100 on BBC One’s Saturday night show, All Together Now.

‘TV shows are looking for something specific and if you’re not it, then you’re better off trying another time’

‘My students have had some amazing experiences since we’ve worked together, but personally, one of the best thing I’ve done was being part of The 100 in BBC’s All Together Now,’ Julie explains. ‘I’ve been involved in talent shows for years but the difference with this was it did what it said on the tin. It wasn’t about finding the next superstar – it was more about giving singers the chance to show what they can do and to get immediate feedback. There was no hidden agenda. We had some brilliant singers, but it was so great to see that this was proper entertainment.’

Julie has worked with plenty of talent show contestants during her time and has learned a lot about their experiences along the way.

‘One of the main things that I know now, that I didn’t know to begin with, is the importance of keeping it real for them – to make sure they stay true to themselves because at the end of the day, TV shows are looking for something specific and if you’re not it, then you’re better off trying another time. It’s important to make them realise that if it’s not their time, it doesn’t mean that they’re not a good singer,’ she says.

‘Song choices have kept me awake for many nights because it makes such a difference. Working on song choice and making sure it’s absolutely right for the current level of singing and the performance is just as important, so the audience feel what the performer is feeling on stage.’

Most recently, Julie worked on Little Mix’s new BBC talent programme, The Search, working alongside television producers as both a talent scout and vocal coach. Lockdown pushed that back, but thankfully it was able to air this September.

‘I was involved in scouting for the singers for the show and I was part of the coaching team for the process way back in November and December 2019,’ Julie explains. ‘Then the latter stage got put back, so a smaller team took over and the show was put on pause. Now we’ll see those audition stages with Little Mix. It’s going to feel really weird – these last few months have felt like two years. It feels like a different life back then but it’ll be great to see some faces and hear voices I recognise, and see how the whole thing shapes up.’

‘So many of my students wanted to work online, and then I picked up lots of students from across the world who couldn’t ordinarily see me’

Although lockdown put plenty of work on hold, Julie has been surprisingly busy at home, having reverted to teaching online just before lockdown hit. ‘I’ve been working like a crazy woman,’ she laughs. ‘I’ve always taught on Skype and Zoom and I thought it would give me a chance to catch up on stuff that I’d been putting off – but then it went crazy. So many of my students wanted to work online and then I picked up lots of students from across the world who couldn’t ordinarily see me. In a way, lockdown was lovely because my husband was working from home too. It was like being a normal married couple for a change, and I did feel guilty because I enjoyed my time as we barely usually see each other. I achieved really great results by working online too. I’ve been working with Carrie Grant on Teen Star UK for years as a judge and that went digital, and I’ve been involved in Zoom auditions for the show. I feel humbled to be in such amazing company and it’s great for the kids to give them something to focus on.’

Lockdown has also made Julie appreciate what Northumberland has to offer. ‘We love travelling. We’ve got a house in Florida and we were supposed to be there as we speak,’ she says. ‘We love going to Spain too. We’re big lovers of food and my husband is an amazing cook. I’m spoilt rotten but a lot of my free time goes into my work – it’s a fuzzy line because singers don’t stop singing and I don’t stop thinking about my students when I clock off.

‘At home, and in my office, I’m up a hill with 360 degree mviews over to the Cheviots – the landscape is absolutely beautiful. I love the space too. When I was working on the Little Mix show and All Together Now in Manchester and Birmingham, it’s so busy, so I love that we have so much space to breathe up here. We’ve got the Sage Gateshead and amazing theatres too and the people have an amazing vibe – warm and friendly.’

At Vocal Ovation, Julie provides professional singing tuition and vocal coaching, and also helps build confidence for those wanting to create a more polished performance in a safe, relaxed and fun environment. The focus is on three main areas: technique and vocal health, performance and delivery to an audience, and confidence and self-belief. She is also keen to share her advice for those looking to enter the music industry.

‘Absolutely make sure that you find someone professional to work with; you’ve got to be able to sing correctly and it’s important to have people to be there for you for support and advice, and to keep you grounded,’ Julie advises. ‘It’s glamorous, but the hard work that has gone into that is crazy. If you’re serious about it, you have to be obsessed with it, to a point. For example, with my student Courtney Hadwin – who received the golden buzzer from judge Howie Mandel on America’s Got Talent in 2018 – is probably the only student I’ve ever had to say “you need to stop practicing so much”. She was singing for far too long, but it was because she was absolutely obsessed with making music happen. You have to work your pants off to get what you want and take many more no’s than yes’s.’

Overall, the thing that keeps Julie going is the joy that music and performing brings. ‘I’m often seeing lightbulb moments with students but also, with the younger ones, it’s their families and friends that get that joy from it too when they’re performing,’ she says. ‘It’s everything that’s connected with singing; when it’s going well, you literally forget about your troubles that are going on in your life – that’s why it’s been a blessing in lockdown too.’

When it’s safe to do so, Julie hopes to continue her work across the world. ‘I’d love to be able to split my time between the UK and America,’ she says. ‘I’d love to continue what I’m doing now on a greater level. It’s not just a job; it’s a passion.’